With the name of Allah, most Gracious, most Rewarding

66:1
O YOU Nabi! why do you forbid what Allah has made lawful for you, seeking the pleasure of your wives? And Allah is most Forgiving, most Rewarding.

66:2
Allah has indeed sanctioned for you the expiation of your oaths; and Allah is your Patron; and He is all-Knowing, most Wise.

66:3
And behold! the Nabi confided an informa-tion to one of his wives;— but when she divulged it, and Allah disclosed it to him, he acquainted with a part of it, and avoided the other part. So when he told her about it, she said: “Who has informed you of this?” He said: “The all-Knowing, the all-Aware has informed me.” 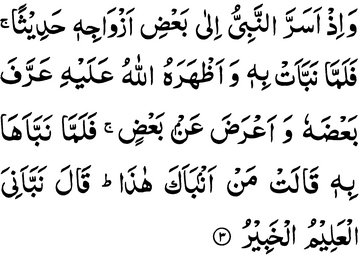 66:4
If you both females turn towards Allah, because your hearts have already turned; but if you both back up against him, then surely Allah, He is his Friend, and Jibril and the pious Believers; and further more, the angels are helpers. 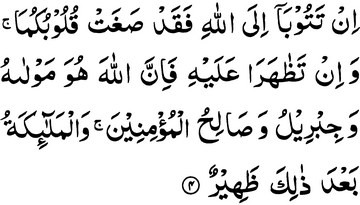 66:5
May be, his Rabb, if he should divorce you, would change for him with wives better than yourselves— submissive, believing, devout, penitent, worshipping, given to Fasting,— previously married, and virgins.

66:6
O you who believe! save your own selves and your families from a Fire whose fuel is men and stones, upon which are angels, stern and strict, who do not disobey Allah in what He commands them, but do as they are commanded. 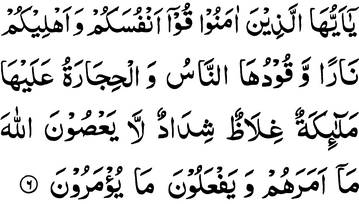 66:7
“O you who disbelieve! do not make excuses this Day. You are only rewarded with what you used to act.”

66:8
O you who believe! turn towards Allah a sincere turning. May be your Rabb will wipe off from you your sins, and admit you into Gardens beneath which flow the rivers; on the Day whereon Allah will not disgrace the Nabi and those who believe with him. Their light will run on in front of them and by their right side— they will say: “Our Rabb! complete for us our Light, and forgive us; surely You are Possessor of power over all things.” 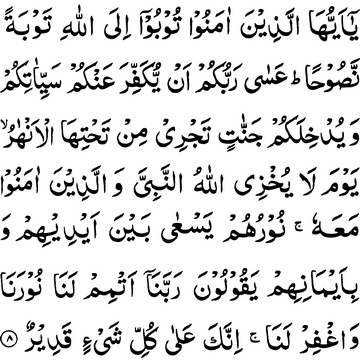 66:9
O you Nabi! do Jihad against the Unbelievers and the hypocrites, and be strict against them. And their refuge is Gehenna; and a dismal passage it is!

66:10
Allah strikes out an example in those who disbelieve— the wife of Nuh and the wife of Lut. They were under two bondsmen out of Our pious bondmen, but they acted treacherously towards them, so they could not avail them anything against Allah; and it will be said: “Enter you both into the Fire along with those who enter.” 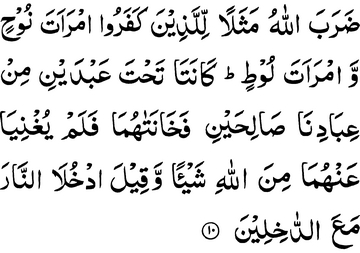 66:11
And Allah strikes out an example in those who believe— the wife of Fir‘awn, behold! she said: “My Rabb! build for me in Your presence an abode in the Garden, and rescue me from Fir‘awn and his activities, and rescue me from the oppressing community.” 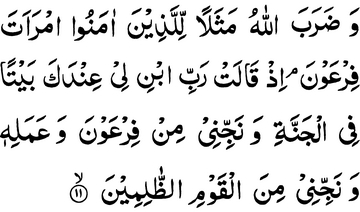 66:12
And Mar-yam, daughter of ‘Imran,— she who guarded her chastity, so We breathed into him Our spirit, while she accepted the truth of the words of her Rabb, and His Scriptures; and she was among the devoted ones. 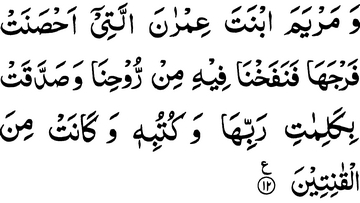