With the name of Allah, most Gracious, most Rewarding

2:2
This Scripture, no doubt in it, is a Guidance for the reverent:

2:3
who believe in the Unseen, and establish the Salat, and out of what We have provided them with, they do spend;

2:4
and who believe in what has been revealed to you, and in what was revealed before you, and regarding the Hereafter they firmly believe.

2:5
These are upon Guidance from their Rabb, and these are themselves the successful.

2:6
Surely those who disbelieve— it being alike to them whether you warn them, or do not warn them— they will not believe.

2:8
And of mankind there are some who say: “We believe in Allah and in the Future Day”, but they are not at all Believers.

2:9
Feign would they deceive Allah and those who believe. But they do not deceive any except themselves, and they do not perceive.

2:10
In their hearts is a disease, so Allah increased to them the disease, and for them is a painful punishment because they have been belying.

2:11
And when it is said to them: “Do not make mischief in the earth”, they say: “Surely we are indeed peacemakers”.

2:12
Is it not that they themselves are the mischief-makers? But they do not perceive.

2:13
And when it is said to them: ‘Believe as the people believe’, they say: “Shall we believe as the fools have believed?” Is it not that surely they are themselves the fools? But they do not know.

2:15
Allah throws back the mockery to them, and leaves them along in their trespasses blindly wandering on.

2:16
These are those who buy Error for Guidance, so their trade does not bring profit, and they are not guided.

2:17
Their similitude is like the parable of one who kindles a fire, but when it has lit up all around him, Allah takes away their light, and leaves them in utter darkness,— they cannot see.

2:18
Deafness, dumbness, blindness,— so that they cannot return.

2:19
Or like a rainstorm from the heaven, in it are darkness, and thunder, and lightning; they press their fingers in their ears against the thunderclaps for fear of death; but Allah is ever encompassing for the Unbelievers! 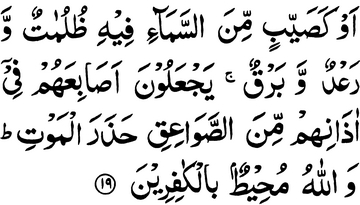 2:20
The lightning almost snatches away their sight. Every time it flashes for them they walk in it; but when the darkness grows upon them they stand still. And if Allah had willed, He could surely have taken away their hearing and their sight. Allah is indeed Possessor of power over all things. 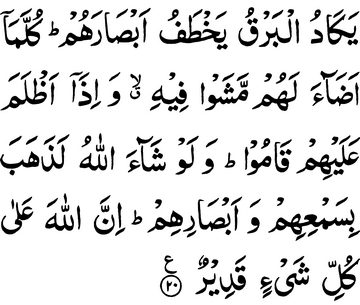